The DeMarini CF8 Fastpitch -11 is the latest offering from DeMarini, and anyone who’s played baseball or fast pitch softball will be familiar with the name.

They’ve definitely released some good bats in the past, but is the 2016 any different, and is it worth getting if you already have a bat?

If you’re not sure if this is worth the price then this review might help. 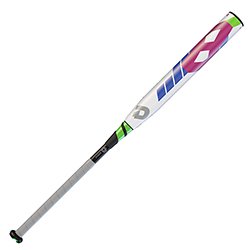 Features of the DeMarini CF8 Fastpitch -11

The 2016 Demarini Cf8 Fastpitch comes with a specially designed Paradox Plus Composite Barrel that according to DeMarini results in superior performance right out of the wrapper.

The sweet spot isn’t easy to hit whether you’re playing baseball or softball, and there’s actually a lot of physics involved in it.

According to DeMarini however, the bat has been improved to such an extent that the sweet spot is now much larger. The CF8 by the way, is approved for use in the ISF, ISA, NSA, USSSA and the ASA.

The barrel also has the D Fusion 2.0 handle that’s designed to optimize your swing so that the effect is more powerful.

The Demarini bats have always been powerful but now the company says it’s so much more with this model, and as far as construction goes, the 2016 CF8 is built in such a way that it produces a springboard-like hitting surface, with the end result being it balances power with balance.

The CF8 also has a Dish End Cap, a design concept that gives the bat a stiff end while directing energy for bigger hits.

What this means is that as a hitter you’re going to have a more powerful, balanced bat in your hands, at least in theory. But how does the CF8 in real world play?

The answer is the bat does very well, as you’ll see.

The 2016 DeMarini CF8 Fastpitch Softball Bat looks good, and taken out of the wrapper you immediately get a sense –from the feel and design- that this is a quality bat.

The bat is light and is finely balanced, and the Paradox Plus Composite definitely increased the bat’s strength.

According to DeMarini, scientific tests were conducted to make sure the CF8 is in optimum shape, and it’s clearly the case judging by the positive reviews it has been receiving.

The D Fusion 2.0 handle is a new piece of technology that was incorporated in this model. If you’ve used the previous model, the CF7, you know that it does a decent job handling vibrations, but the CF8 is much more effective because of D Fusion.

Vibration occurs when you don’t hit the ball properly during a swing, but with the CF8 you don’t have to worry about that because of two reasons: first the D Handle reduces vibration more effectively, and second, the sweet spot here is much larger.

What this means is as a player, there is more protection for your hands against the energy and sting that is redirected, and the design allows for full power to be unleashed in each swing.

As many reviewers have also noticed, the bat has a solid pop, and the sounds for hits are also much crisper compared to the CF7 and other bats.

A word here about the Stacked Double Wall Construction, because it’s one of the reasons why the CF8 is knocking it out of the park.

Essentially what this feature does is produce a trampoline-like effect throughout the barrel so you get the maximum performance from the bat each swing.

If you haven’t used any of these bats before, what all these tech means is you’re going to get more out of the bat compared to the CF7 and other models out there.

You don’t need to take the word of DeMarini on this, as you will literally feel the difference when you take a swing.

Because energy movement is fully concentrated, you’re not going to waste any power.

The CF8 has several factors in its favor, but to highlight the important points:

While the bat has a lot of positive features, there are a couple of things you need to know about:

What Customers Say About the 2016 DeMarini CF8 Fastpitch Softball Bat

Demarini CF8 Fastpitch reviews have been mostly positive, with most in agreement over its balance, power and sweet spot, which is much larger compared to other bats.

Based on these reviews, the CF8 looks like it’s been received warmly, and it’s holding up well when compared to other bats.

Considering the fact that DeMarini has manufactured a lot of other softball bats, this is a testament to the CF8’s quality and built.

The 2016 DeMarini CF8 Fastpitch -11 is a solid, well-rounded bat, perfect for fastpitch softball.

If you’re shopping for a bat there are several things you look for such as balance, pop, a good sweet spot and power.

The CF8 delivers in all those areas, and it does so much better compared to others available today. While the CF8 is going to cost a bit more than the typical bat, it’s worth the price.