The 2015 DeMarini CF7 Fastpitch -11, according to the company tagline, was manufactured to help younger players reach their maximum potential, and for once, here’s a product that matches the hype.

Now there are a lot of softball bats in the market today, but as this review will show, there’s plenty here that give it an edge over the rest of the field.

The 2015 DeMarini cf7 DXCFS fastpitch has several features worth mentioning, but it’s good to start with the composite barrel, as it was constructed to produce a bigger, sweeter spot, be it for baseball or softball.

In addition to this, the product comes with the DeMarini D-Fusion handle to improve your grip of the bat.

Another notable feature of the DXCFS is the Carbon Reinforced Paradox that improves energy transfer when you make a swing, and there’s also the thermo fused taper that redirects energy into the barrel, thus eliminating vibration.

There’s also the Clutch End Cap which is present in all CF7 bats, and basically what this does is facilitate the transfer of energy from the handle to the end of the bat.

In terms of function it is similar to the D Fusion, and combined they provide a lot of precision hitting and power.

These are just some of the major features on the bat, and not only do they sound impressive, but they do have practical functions and combined, make this the ideal softball bat for youngsters. 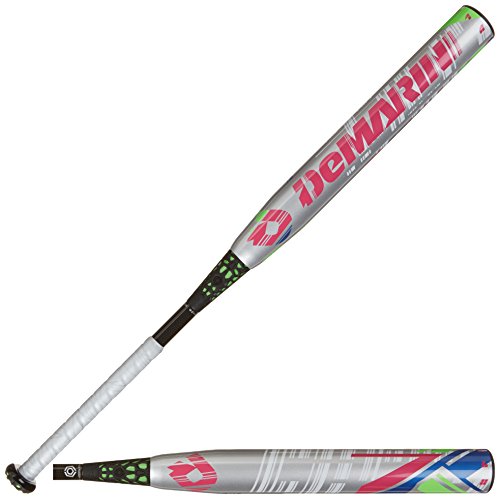 The 2015 DeMarini CF7 Fastpitch softball bat DXCFS, first of all, is a heavy hitting bat, and there are few in this class and range that can rival it.

It helps that the sweet spot is large so even if the ball isn’t hit dead center, it’s still likely going to go off.

There’s a very solid pop as well and it’s actually comparable to some of those designed for older players.

Of course that power needs to be accompanied by a good handle, otherwise you won’t be able to maximize the hitting.

That’s where the D-Fusion comes into play because it improves the performance of the barrel without compromising the handle. In fact the D Fusion technology improves the overall feel of the bat.

Handling is one of the key elements to swinging a softball or baseball bat properly and with power, because if you can’t handle the bat right, it will affect your swinging power.

Apart from the D Fusion handle, the Carbon Reinforced Paradox is a huge factor as well because as indicated earlier, this is the element responsible for transferring power from the handle to the barrel.

While the physics involving the swinging of softball bats can be complex, suffice to say that with this bat, your youngster’s hitting prowess will be fully utilized.

Another area where the CF7 shines is in the anti-vibration department. Vibration is a very common problem in fast pitch softball because too often, hitters don’t use the right bats.

With the CF7 however, it’s something your kid doesn’t have to worry about because the thermo-fused taper reduces this problem.

But the thermo fused taper does more than that because it also enhances the impact of each swing.

How does it do this?

What the thermo fused taper does is point the energy towards the barrel instead of the handle, so not only is vibration reduced, but the impact is increased as well.

What all these means quite simply is that your child will get more power out of this bat without sacrificing precision.

The CF7 however, still manages to be light in spite of the increase in power and that’s worth pointing out too. All too often, softball bats are either powerful but heavy or light and lack power, but this one offers the best of both worlds.

The DeMarini CF7 fastpitch has a lot on the upside:

The 2015 DeMarini CF7 fastpitch softball bat is great, but that doesn’t mean it isn’t without shortcomings:

Anna of Chicago also gave the bat a positive review:

These are among the many reviews of the CF7 that you’ll be able to read online, and as you can see, the feedback has been very good.

Conclusion on This 2015 DeMarini CF7 Fastpitch -11

The 2015 DeMarini CF7 Fastpitch -11 is one of the best in the business right now.

It’s strictly for young players who want to take their game to another level, so if you’re that kind of player then this is the one to get.

The fact that it’s good enough to be used in both baseball and fast pitch softball says a lot about how well this bat is designed.