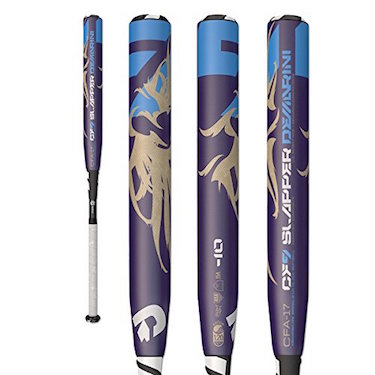 It’s a relief that the 2017 DeMarini CF9 fastpitch softball bat is finally here.

The CF series has always provided players with excellent bats, and this year marks a revolutionary change in what you get.

I know you understand the fastpitch game can be challenging, even for experienced players.

For newbies, it may even be intimidating.

The pitcher’s windmill delivery seems menacing, while the ball travels through home plate at a daunting speed.

But when you’re armed with the right DeMarini CF9 fastpitch bat, your confidence can rise.

You have one of the best bats for the game in your hands, and your hitting can improve tremendously.

Just Show Me The CF9 Bats!

The DeMarini Story So Far The DeMarini CF9 is just the latest phenomenon from the vaunted brand, which is famed for its tradition of superb performance.

The DeMarini origin story is a legend in the industry, and understanding the CF9 requires a bit of background.

Once upon a time, a player suddenly rose to fame in softball. What’s strange is that it wasn’t some hotshot kid. It was actually a 40-year old named Ray DeMarini.

His fame was due to his uncanny ability to hit balls into what’s known as the no-man’s-land: the precise area between the outfield and the infield where it couldn’t be fielded quickly.

This became known as “reflex hitting”, and soon afterwards he partnered with ESPN to produce his smash hit series of instructional videos.

It was called Ray DeMarini’s Reflex Hitting System, and it became the most popular ESPN home video of all time. Soon DeMarini was being hailed as the “King of Softball”.

But it wasn’t enough for Ray to teach generations of softball hitters how to hit properly.

What Did He Do Next? He was determined to offer them the best bats as well, so he found an engineer and scientist named Mike Eggiman to partner with him to achieve this goal.

Eggiman grew up on a farm, and they founded the DeMarini manufacturing company in 1989 in a humble barn that even had a dirt floor.

Despite the low-tech accommodations, DeMarini soon came out with a ground-breaking lineup of bats that completely shook up the industry.

Before the arrival of DeMarini, softball bat manufacturers usually offered 2 types of bats.

They had one bat for regular players, which were affordable but didn’t really offer much in terms of performance.

The other bat was for the pros, which were superb but harder to use and more expensive.

DeMarini combined the best of both worlds in their bats. Their softball bats were affordable and easy to wield, and yet they offered a performance that the pros loved.

Word spread about the excellence of the DeMarini bats, so it didn’t matter that the company didn’t have retailers.

They became successful selling directly to their customers, so that in just 3 years they were able to move from the barn to a heated metal shack.

The DeMarini name lives on, despite the passing of Ray DeMarini in 2001.

It’s a yearly custom for the brand to come up with a new line of terrific fastpitch softball bats, and the 2017 CF9 continues that annual tradition. So what’s so great about the 2017 DeMarini CF9 fastpitch lineup?

The price tag may be a bit formidable at $350, but you sure get your money’s worth.

Check Out The Next Three Special Features

This is the lightest CF9 fastpitch bat of them all, and it’s available in sizes ranging from 28 inches (17 ounces) to 33 inches (22 ounces).

That’s the kind of drop that’s great for the younger kids, as they get the ability to control the bat well.

Younger kids don’t do well with heavier bats, but that feather light 17-ounce weight should be marvelous for you good hitters.

If your kid is a beginner, this is what you get them.

It’s light yet strong, and the handle plus the large sweet spot can keep the stinging to a minimum.

This is the most popular version of the 2017 DeMarini CF9 fastpitch softball bat, as the light weight and the balanced weight distribution offers singular control over the bat.

Having this in your hands can really boost your confidence at the plate.

If you’re not sure what to get, this serves as the de facto default.

It can serve many types of hitters, and even small kids with not much power can get on base more often.

The weight distribution here has more weight at the end, so that feels a little bit like wielding a hammer.

If you’re a powerful hitter, this can be your weapon of choice.

This configuration can really boost your hitting lots more extra base hits.

The endload can really let you take a whack at the ball, and making contact can launch that ball into orbit, or so it seems!

Some players bat left-handed even when they’re righties, so that they can slap the ball towards the third base area while they dash to first base like mad.

The goal is to get on base as often as possible.

This kind of slap-hitting technique needs a bat like the Drop 10 Slapper.

Then the weight is also laid more near your hands, so you get exquisite control over the bat and the ball.

You can direct the ball where you want so that the fielders have trouble getting to the ball.

What makes this Slapper great is that you don’t have to use the slapping technique every time.

You can keep the defense honest by swinging hard every now and then, and this bat gives you the ability to drive the softball through the gap.

This gives you the same performance as the Balanced 2017 DeMarini CF9 fastpitch softball bat.

The difference is that it’s made in partnership with the Breast Cancer Research Foundation.

So you can get it and contribute in the fight against breast cancer, and you also get a superior bat with a limited edition design.

This is for the heavy hitting big kids in high school and college.

Its massive size can really power up your hits, and it’s also much more durable.

The colors of this bat are blue, white and grey.

Like all of these bats…there is a one year warranty.

This is the elite weapon for the biggest and best cleanup hitters in your team.

If that’s you, then this is the bat you need to get for fastpitch softball.

This bat is a beast so if you’ve got some muscle and want to power a few out, this is for you.

With the new CF9, you get the very best in fastpitch bats.

You get a lot of control, plenty of pop, and minimized stinging in the hands. What more do you want in a bat?

With the 2017 DeMarini CF9 Fastpitch Softball Bat, everything you need is right here, down to the weight distribution and drop of your choice.

Get this now, and you’ll see your hitting improve so quickly that you’ll never think of using another bat this season!