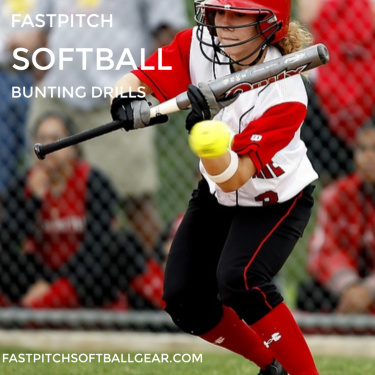 Most dream of hitting a walk-off homerun, as the crowds cheer for the feat and the win.

Sometimes the best move is to go for a bunt instead often swing for the fences.

In some cases, you want to get the runner on first into scoring position at second base, and you think that option is worth an out.

Maybe you want to bunt for a hit, especially when the fielders aren’t expecting the bunt.

Sometimes the bunt is even a purely psychological counterattack.

Maybe the pitcher is on a groove, striking out all the batters.

Making contact at last can rattle their cage and make them play proper defense for once.

Whatever reason you may have for fastpitch softball bunting, it’s simply crucial that your players know what to do if a bunt is needed.

At the same time, bunting drills can teach your team what to do when an opposing batter decides to bunt against you.

So here are some drills you can try:

Here’s the first one I’d try out of all fastpitch softball bunting drills.

Set up 2-player pairs for your entire team.

Then you define the areas along the paths to 1st base and 3rd base with bats, where the ball must go for the bunt.

For each pair, one tosses the ball while the other tries to bunt.

The tosser yells out “First!” or “Third!” to indicate where the bunter must place the pitched ball.

If the bunter is able to get the ball into the proper zone, then they get a point.

They lose a point if they fail.

After all balls are pitched, they bunter and tosser exchange places. Afterwards, you check the scores.

The point of this bunting drill is to help bunters learn how to punt to a particular location.

It’s one of the fastpitch softball bunting fundamentals. The ball should not go directly to the pitcher or go into foul territory.

This time you have groups of 3.

A setup similar to Drill #1 is needed with bats defining the safe zones.

Now there are two pitchers. The pitcher on the first base side throws first, and then once the bat makes contract the other pitcher starts the toss.

They then take turns making pitches. Once the balls are done, one of the pitchers becomes the bunter.

The point of this drill is to improve the reaction time of the bunter. They have to be aware of each ball coming at them.

This time, you have a pair of players or you have a coach with a bunter.

Next, you define where you want the bunted pitch to go with a pair of cones.

This drill may seem similar with the others, but there may be several key differences.

One is that you can place the pair of cones precisely at the distance you want, so you can show bunters how far away the ball must go.

Bunters can’t just stop the ball right next to the catcher, as it’s an easy out.

Remember too, they practice softball catchers drills too!

In addition, the pair of cones can keep the bunted ball away from going down the line. That’s because often it just rolls out foul.

So you can get nearest cone to the line about a foot or two away.

Don’t forget that according to the fastpitch softball bunting rules, if this happens 3 times, you get 3 strikes and an out

To further motivate the bunters, maybe you can a competition going.

See how many successful bunts they make for 10 tries to each side, or for a single minute.

With how competitive so many athletes are these days, such a competition can keep them from goofing around.

Hitters need to know how to soften their bunt too, and this particular drill can do that.

This is one of the more important fastpitch softball bunting techniques.

The drill requires a pitcher or a pitching machine, a batter to bunt, and a bucket in front of the plate.

Basically, the pitcher tosses the ball and the bunter attempts to put the ball right into the bucket.

This teaches them how much to lay off the ball to put the ball right where they want to.

Once they’ve mastered the bucket in front of the plate, you may want to move the bucket left or right or maybe farther away.

Deadening the ball is a required skill in bunting.

Pitchers can throw the balls at different speeds and the bunters must adapt, because that’s what will happen in a real game.

To learn more about how an infielder might react to you take a look here.

This is the bunt and run race with two lines of batters for each side of the plate.

You have two batters at opposite sides of home plate trying to bunt.

Maybe you have 2 cones for each batter defining where their bunt should go.

Once they make the bunt, they then race to their respective 1st or 3rd base after making contact.

When they’re done, they can go to the opposite line so they can try the other side. This can be a fun way to motivate players.

Just remember, practice makes perfect, and that’s what you do when you do fastpitch softball bunting drills.