Fastpitch softball catchers drills are among the best training tools of coaches these days, because catchers need to master too many skills.

The position may not seem as glamorous, unlike being the pitcher or the shortstop. If you’re the catcher, you don’t get as many highlights like the 3rd baseman who stops a ball down the line or an outfielder who makes a sliding catch.

Yet despite the lack of glamor, there’s certainly no lack of importance in the position. The catcher needs to catch and block the pitches so runners don’t get to steal a base.

They can catch base runners with a throw, and also block the plate to stop a run. These defensive skills must be developed, and you do that with softball catcher’s drills.

To help you get started, here are some of the basic catcher drills for fastpitch softball that you can use to help your catcher become better at their position.

If you’re interested in softball infield drills then go here. Drop, Block, and Up Drill

This speed drill works on your catcher’s form.

This is one of the basic fastpitch softball catchers drills for beginners.

The drill teaches the catcher how to replace her feet on the ground with her knees, when she shifts left or right to block a pitch. 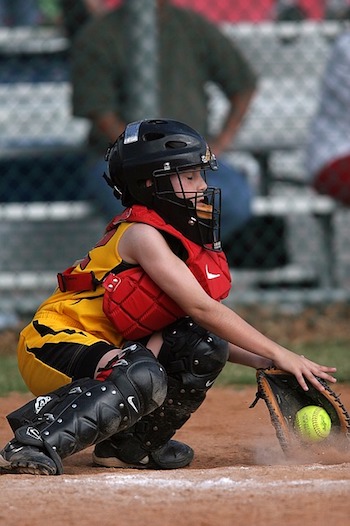 The body has to be angled properly towards home plate, while the left or right leg has to be thrown properly so that the catcher slides into proper position.

This drill can be done 10 to 15 times for each direction.

As the catcher improves, you can then make the drill more challenging by actually tossing softballs gently to her left or right so she can practice blocking the ball correctly.

The point of these fastpitch softball catcher blocking drills here is to counter the instinct to just block the ball with the glove.

The catcher must develop the habit of using their whole body to block the ball each time.

Finally, the next progression of this drill is to incorporate the throw. So have her block the ball and then throw to second base.

The catcher learns to retrieve the ball after it bounces from her body, so that she can throw a runner out at 2nd base.

Catchers need to react quickly to pitches so that they can have their body blocking the ball.

Here’s a drill to develop this skill:

There’s a tendency for some catchers to fail to block the ball when there are no base runners.

But to improve, a catcher must always instinctively block the ball.

This makes it easier to do when there are base runners whom the catchers can throw out.

Another job of the catcher is to present the glove and her for the pitcher to target with the right pitch.

The catcher’s stance reminds the pitcher where to throw.

This helps the pitcher too, so it’s one of the more important fastpitch softball catcher’s drills.

As the coach, you need to teach the catcher to split the inside corner of the plate with the middle of her body to provide the frame of the target.

Then she holds her glove out to place the glove into the middle of her body from the pitcher’s perspective.

The same goes when the pitch is towards the outer side of the plate. To emphasize the wide range of functions that catchers need to master, here’s the popup drill.

When batters hit a popup ball, often it’s a catcher’s job to get the ball for an easy out.

So if you’re the coach, have your catcher crouch in position while you toss softballs in the air for her to catch above her head.

Here are some softball catcher’s tips that may help with your popup drills.

You can do 4 to 5 sets of 5 reps each for short popups, high popups, and popups behind her.

Try to place the popups in different locations so she can practice locating the ball. This isn’t easy with short popups.

Try these various fastpitch softball catchers’ drills and you should see a marked improvement for your catcher!

Why wait until next season, next month or next week? Start today!

Before you go check out these intensive fastpitch softball catchers drills.