Choosing a softball glove is never easy as there are a lot of factors that need to be considered such as how you play the game, the position, hand size, and age among others.

One name that’s frequently being mentioned as one of the top softball gloves is the Nokona X2f-1250, so how does it hold up against the competition and in actual play?

Nokona fastpitch softball gloves are made from leather and have 12.50″ patterns, and the closed web and back speaks volumes about the design quality.

There’s a reason why this is called the Elite Series as they’re designed for optimum performance and meant for the use of novice and skilled players alike.

According to Nokona, the X2 are built to last and breaking-in will be quicker compared to other gloves.

Design wise the X2 looks great, but more than that the gloves are made using Nokona’s special proprietary Nolera Composite Padding System, Kangaroo Leather and Stampede Steerhide so the gloves are fit perfect. 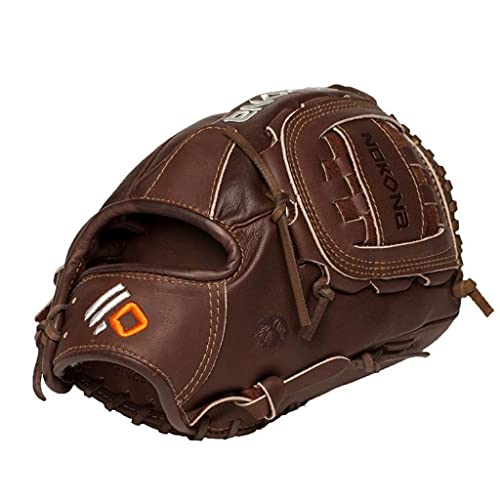 The glove has also been constructed so that it is ready to use out of the package without any need for steaming or other preparations.

According to Nokona, these gloves will provide flexibility and just the right amount of feel necessary to play the game.

While Nokona is packed with a lot of features, that hasn’t translated to any additional weight: far from it actually as the glove is very light and easy on the hand.

In addition, Nokona added the Ristankor Closure System, only this has been fortified. If you’re not familiar with the Ristankor System, it’s been around since the 1950s, only now it’s constructed with Velcro.

What this means is when you wear the glove, breaking in is much smoother, and with its open back and closed web design, is suitable for first base, catching and other positions.

It’s true there are a lot of so-called general all purpose gloves, but few of have the same level of features the X2 has.

The Glove in Action

The Nokona X2 Elite Fastpitch Series: X2F-1250 looks great, and from the price you’d expect something high quality, and you won’t be disappointed.

The bottom line is you won’t be because the gloves are finely constructed. The leather feels great, and breaking in won’t take much effort.

One of the biggest concerns of softball and baseball players is some gloves just take too long to break in that it affects their performance.

Nokona seems to have addressed that issue here: actually you can use the glove right out of the box and play, it’s that comfortable.

However if you want maximum performance you’ll want to spend a few rounds at practice getting the feel of it, and it’s going to pay off.

As Nokona said, these gloves are made using Stampede Steerhide, Nolera Composite Padding System and Kangaroo Leather or any combination of the three.

Even if you don’t know the technical details behind each one –or which is used in your glove- there’s no mistaking the fact that it fits right.

One of the trademarks of a well-designed softball glove is there’s a fine balance between flexibility and rigidity, and this glove nails it.

If you play fast pitch softball you know how an imbalance here can drastically affect the way you hit or catch a ball, so balance is extremely important.

Apart from the easy break in, it’s also to your advantage that the X2 feels light, because a clunky softball glove is going to weigh heavily on your wrist and affect your performance.

It’s no secret that Nokona created this glove for top level performance, but if you’re new to the game you’re still going to benefit from it.

One more thing needs to be pointed out, and it’s that the X2 is very durable: as reviews and comparison tests show, this one is bound to last longer than cheaper softball gloves.

There are a lot of positive things you can say about these gloves:

As for the cons, there are a couple:

Nokona X2F-1250C Softball Glove reviews are very positive and given the feature list above that should not be surprising. You can find a lot of these testimonials online but here’s a few:

Based on these reviews and testimonials, it’s obvious that the Nokona has several satisfied customers, and that more than anything else is indicative of its quality.

The Nokona X2f-1250 gloves are a bit more expensive than your regular run of the mill type, but as they say you get what you pay for.

The price difference really isn’t that much anyway, and when you consider how much better the Nokona is compared to other gloves, it’s definitely worth the investment.

Why get an ordinary glove when you can get these instead? If you’re serious about the game, don’t settle for anything less.